In his seminal work, The Presentation of Self in Everyday Life, sociologist Erving Goffman uses theatre and performance as analogies to describe all our social interactions.  He argues, in essence, that we are actors, consciously or unconsciously performing our identities for and to others.  For different audiences, we no doubt assume different roles, responding like actors to environment, stimuli, and relationship, as we seek our broader super objectives.  Like actors, we appreciate the applause, even if our performance is less than stellar.  Many of us can also acknowledge that those identities we perform for the people around us are as much a fiction as the characters the theatrical actor assumes over a lifetime: so much smoke and mirrors—and  a lot of make-up—even if built on the actor’s psyche and physique.

In this sense, it is not surprising that the celebrity performer has assumed such a high degree of acclaim in our society.  If we are all performing the fiction of our identity, then why not tip our collective hat to those actors, athletes, musicians, newscasters, politicians, who have risen to the top through their ability to perform their identities to the public.

Just how far the celebrity performer has risen really came home to me this New Year while watching an ABC evening newscast “In Memoriam: People We Lost in 2012.”  Of the 86 people whose deaths were notable, 45 of them were performers—actors, singers, musicians.  Eleven more of them were writers or speakers of some kind—journalists, authors, newscasters, and a motivational speaker.  The next closest categories were those serving in the government, non-performing artists, and athletes.  There was one inventor, N. Joseph Woodland, who co-invented the barcode; one soldier—Gen. H. Norman Schwarzkopf, who famously co-designed the blitzkrieg used in Iraq I, 1991; and one regular person—Rodney King, who, of course, performed unwittingly on video along with the gaggle of LA cops who were kicking and tasering him.

Now, I’m not disputing anyone’s right to be listed in ABC’s “In Memoriam” dedication.  A notable death is a notable death, but can we seriously accept the fact that in 2012 there wasn’t at least one notable educator who died, or one police officer, or pastor, or architect, or engineer?  Clearly, there must have been a notable scientist or two who died, but not according to ABC.  One can only assume that the criteria used to determine which 86 people would be highlighted must have defined “notable” in such a way as to favor the celebrity, or those whose performed identities played out on the electronic media.

I make note of this phenomena not simply because it is but one more piece of evidence suggesting the circular logic of the electronic media, i.e., they decide what is important based on what is important for them.  For me, the danger of this trend is twofold.  On the one hand, by socially elevating the celebrity performer we acknowledge that we appreciate the act of performing more than the content of the performance itself.  Perhaps, this happens because the content of any performance is temporal, as temporal as last night’s rendition of Shear Madness.  Thus, why not celebrate the performance as an end in-and-of-itself?  This kind of thinking might explain our political actors’ determination to perform the same fiscal cliff / sequester cliff drama over and over again until we are numb with exhaustion. 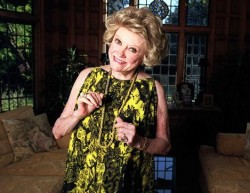 On the other hand, even more disturbing is what our obsession with celebrity reveals about our values.  It seems as if we value the celebrity performer and his or her fiction more than the people who really do the day-to-day work of improving our society.  In other words, the actor who mimics the lawyer, the cop, the doctor, the teacher, the scientist is more notable than the people he or she mimics, the people who perform those professions in life, making an actual difference in our lives. And I say this, even though I love actors and the work they do, albeit on the stage more than in film where the camera is the real star.

So, as each of us prepares for our roles today as father or mother, clerk or caring friend, let us acknowledge and salute the performer in all of us, and let the celebrity take a step or two—or three—toward the back of the line.  For it is the authentic flesh and blood doer of deeds who actually makes a difference in our lives.  Let us make notable the EMT who examines the gunshot victim and stops the bleeding: not the actress on TV who imitates her between make-up touch-ups, lighting adjustments, and a shout of “Action!”